i think i'll make one of these for myself 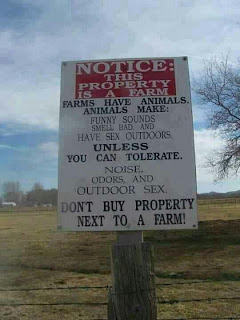 
There is an article in the Register Star today about the suit against the town and a business owned by a town official being tossed out by the judge. I'll post the decision if anyone wants to see it, but essentially, the judge didn't buy my argument that standing should include more than the local effects of the business, that there needs to be a rational application of the law to apply to all in order to allow those living under the law to know what is and is not allowed. The judge sided with the town that the issue should be considered narrowly.

I know that these small towns should not have town courts and town highway departments. You simply spend too much money for too uneven a product, including complete incompetence and corruption, patronage and abuse of criminal justice, in many instances, by allowing 1200 jurisdictions to administer justice and buy equipment and hire workers. If you reduced the number of jurisdictions, they would be easier to police. If you get rid of town court and town highway departments, you could save boatloads of money and get better justice and better roads.

Speaking of police, I also know that a county of 65,000 people should not have 6 police forces, like Columbia County. Comstat, used in the New York City to put resources where they are needed, lead to an 85% reduction in crime over 20 years with no increase in spending. That's what this rural area needs: the ability to allocate resources based on hard data regardless of arbitrary political unit, "Hudson" or "Philmont" even Columbia County. If there is a crime wave in Philmont, take officers out of Hudson. You could save a lot of money and get a better product.

In terms of the town assessor, real estate taxes should, ideally, be largely replaced with other taxes, as property taxes are expensive to collect, inherently unfair, cause distortions in development, and punish farmers, retirees, and poor towns. But if we can't get rid of assessment, we should get rid of the local assessment office and standardize the system in larger units with layers of accountability by people who do not know each other. You can save a lot of money, or better yet, get rid of the tax all together and replace school funding with a better mechanism.

But what about zoning and planning, the issues at the heart of the case that was dismissed? My answer to this problem is more complicated and I'm still chewing it over. I know that letting many small towns around control zoning and planning has lead to nothing good and a lot bad. I know that the power in these boards, if there will continue to be boards, has to be more dispersed. I'm thinking...

strange article in the register star

Here is the article. So, I didn't get the documents. Then I sued and I did get them. But somehow I shouldn't have sued and the town won. A victory lap in the Register Star? With a two year old quote from the Committee for Open Government (see this entry on my blog)?

When the court says "given that petitioner has received all the relief to which he is entitled, the matter must be dismissed as moot" that means I got the documents. So case dismissed. I won.

I wrote it up briefly here.
Posted by Unknown at 3:03 PM 0 comments

Yes to dogs, small business and fairness. No to corruption and voodoo.

Board of Supervisors, Committee and Agency Meetings